The journey through the history of the toilet: a topic that you can file in the “Stuff I Don’t Really Need To Know” compartment of your brain.  So why read this then?  No one’s making you.  But hey you never know: one day, Q7 of HQ, Mr. Scott Rogowski himself just might ask, ‘Who designed the precursor to the flush toilet system in 1596?’ — and after this little knowledge sesh, you’ll know it’s John Harrington.  BAM! On to Q8 for you, H-Cutie. (H-Tooty if you prefer a little toilet humour.) 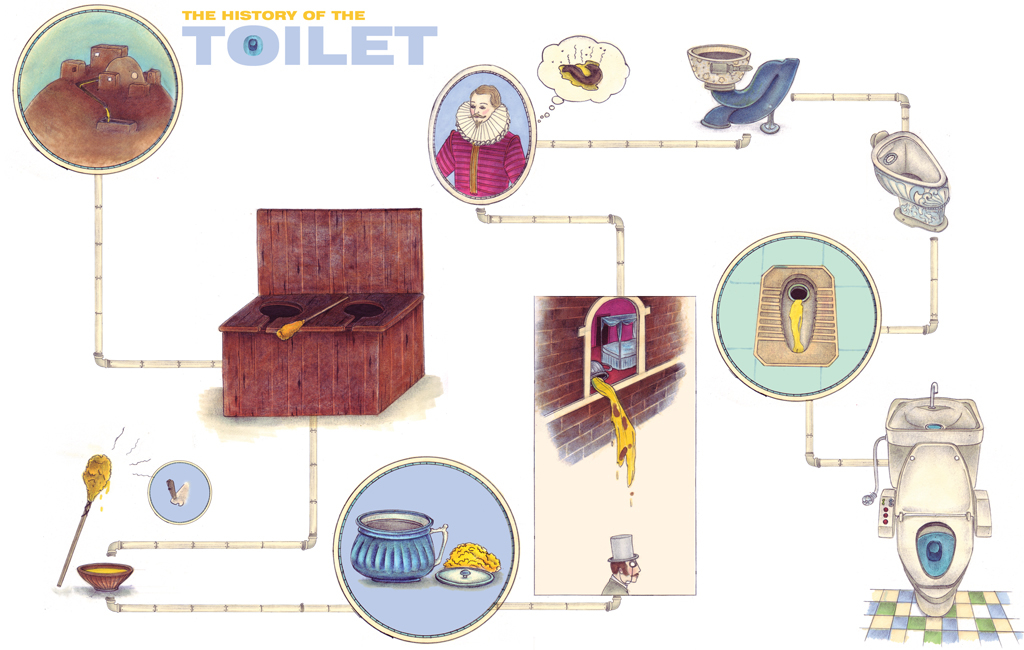 Toilets and sewer systems were developed throughout the world in the third millennium BC.  The same structure, albeit a much more improved design, is still used today–a vertical chute in which waste travels through to cesspits.  Happy Christmas, eh?  Not sure why I chose this topic for December 27th, but now you and I are both stuck with it.  So let’s make the most of this!  Anyways, I must note, that these toilets were only used by the rich kids.  That’s right, if you didn’t have the Dinero, you’d be squatting over a pot or a hole in the ground.

Fast-forward to post-classical times, which runs from about 600 CE to 1450 CE.  Once again, just for the rich, but they had the magnificent GARDEROBES!  Wait…isn’t that a Pokémon?  Kay, maybe it’s a few letters off, but garderobes were essentially a long bench with several holes cut along it to sit and, well, dispose of your waste.

Zoom ahead to the 19th Century, with the onslaught of public officials and public hygiene experts, an underground network of pipes was advised to carry away waste.  Oh yes, did I forget to mention?  Until this point, the gutters in cities were basically waste rivers.  Our gutters don’t seem that bad in comparison, do they? Nope, they don’t.  You’re welcome for answering that one for you. I know it was a toughie.

Dry earth closets took the world by storm in 1860 when Henry Moule and James Bannehr took out a patent for their design which comprised of something similar to a compositing or bucket toilet.  If you’re following the years, you’ll notice that this is 300 years after the precursor to the flush was invented–so what happened?  I thought you’d never ask!  Well, to really make it effective, what is known as the S-Trap had to come along.  And guess what, in 1775, it came along.  A Scottish mechanic by the name of Alexander Cummings invented and the best part is, they are still used today.  They added water into the toilet as a result, and how do you mashup dry earth closet and water?  Well, if you’re British, you’d be quite familiar with the term ‘water closet’.

I think it’s time to bring this story to a close.  But if you have any questions about plumbing history or dirty, dirty gutters, please do not hesitate to call us at 289-244-9843.  At Go Green Plumbing, we are always happy to help.

Fraser is the web developer and graphic designer for Go Green Plumbing. He is a husband, father, tech-lover and frequent viewer of cat videos on YouTube. Sometimes, he adds a sentence to make a paragraph look better.

More Posts You May Find Interesting